Alright, I opened up my big mouth on the Lead Adventure forum about how I'd like to put together a mechanized machine gun contraption. This means that I'm obligated, nay, oath bound to construct this beast.

Here's what I'm talking about; 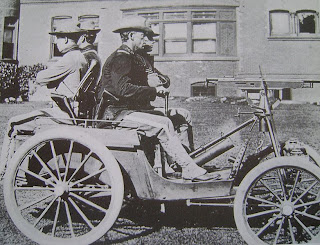 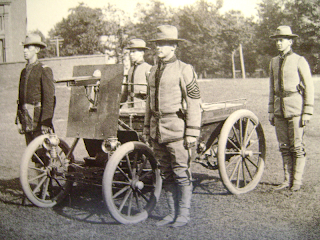 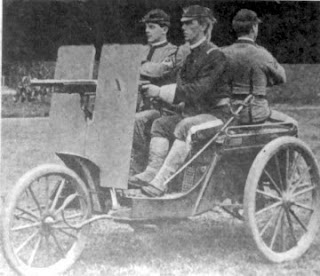 What you see there are a Davidson four wheeled gun carriage and a three wheeled version. I like the three wheeler best.

The trouble is finding the parts for the thing. The machine gun is no problem. I've got a plastic gun shield lying around from who knows where, so that's covered. I was hoping to find a plastic model kit of something roughly close to 28mm scale to use for parts. I find out that there is nobody at all making automobile kits from the late 19th century and early 20th. Not even horse drawn buggies! The earliest you get is the 1920s. So, I'm going to have to scratch build this puppy. Maybe even the wheels!

The next problem is finding and converting a crew. Which army is this going with anyway? I guess it'll go to the French. The Germans are getting enough goodies as it is. Nobody really makes seated soldiers of the Victorian era. There are some gun limber crews that are seated. Mostly Prussians though.

Next. What kind of engine? Should it be steam? Eh, it doesn't have to be. I'm not really doing "Steampunk" here. This is Victorian Sci-Fi. I could see this as an internal combustion engine that's about a decade ahead of its time. I mean, the Davidsons pictured above are from around 1900. 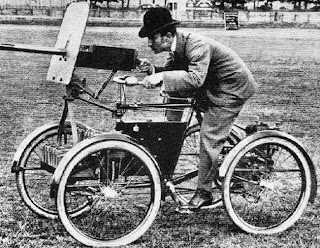