So I've got me a blog. I think it should be fitting that I show off the very first miniature I ever painted. Somebody or Another the Rotund from Ral Partha: 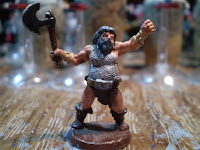 Pretty sweet, huh? Looks kind of beat up. I must have painted him somewhere around 1990. In the 8th grade. I used acrylic paints and sable brushes even. I was already ahead of the curve by not using Testors enamels.

I think I'll repaint him now that I took a picture...

As for the present, I'm currently working on completing my British, French and German fleets for the Aeronef game. There will be pictures! Also in the works (you know, aside from everything else) is a Knoe Shoshu from the Space 1889 RPG that I'm sculpting. This gribbly creature is due to be completed by the end of the month. I shudder at the thought.

Another ongoing project is my Empire army for Warhammer Fantasy Battle. It was started sometime around 1993 and is still not finished. It's a mess is what it is. Not a badly painted mess but it just plain isn't done yet. I've been struggling with deciding on a unified base scheme for all the painted units. Something that will really make the army look done. More on this in the future.

Project number 2654 is my newly conceived world of Angstrad for use with the Dungeons and the Dragons. Most likely for AD&D second edition or D&D Rules Cyclopedia. Maybe a mash of both. It will be all gribbly and cool. You will read about it here first.
Posted by Garry at 4:32 PM